After each decennial Census the Legislature redraws the districts from which Florida voters elect their state representatives, state senators, and members of the U.S. House of Representatives.

Redistricting is the redrawing of congressional and state legislative districts to adjust for uneven growth rates in different parts of the state. Districts determine which voters participate in which elections.

The Voting Rights Act also prohibits purposeful discrimination and protects against retrogression—or backsliding—in the ability of racial minorities to elect representatives of their choice. Prior to the 2013 U.S. Supreme Court case Shelby County v. Holder, which negated the coverage formula in the Act, these requirements applied only to certain counties in Florida: Collier, Hardee, Hendry, Hillsborough, and Monroe. Districts containing parts of these covered jurisdictions had to be submitted to and precleared by a federal court or the United States Department of Justice before the redistricting plan could be enforced. The Shelby County decision means the preclearance process established by the Voting Rights Act is no longer in effect, but it does not affect the validity of the statewide diminishment standard in the Florida Constitution.

Article III, Section 16 of the State Constitution requires the Legislature to divide the state into 30 to 40 contiguous senatorial districts and 80 to 120 contiguous house districts. A district is contiguous if all of its territory is in actual contact, uninterrupted by the territory of another district. Contact at a corner or right angle is insufficient, but territory may cross bodies of water. The Constitution allows state legislative districts to overlap, either partially or entirely.

In November 2010, the voters added Amendments 5 and 6 to the State Constitution as Article III, Sections 20 and 21. These Amendments prohibit line-drawing that intentionally favors or disfavors a political party or an incumbent. The Amendments also afford protection to racial and language minorities. Districts may not be drawn (1) with the intent or result of denying or abridging the equal opportunity of racial or language minorities to participate in the political process; or (2) to diminish their ability to elect representatives of their choice. Finally, unless it would conflict with the standards described above, the Amendments require that district populations be as nearly equal as practicable, and that districts be compact and, where feasible, follow existing political and geographical boundaries. 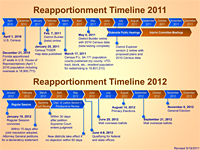 The Reapportionment Timeline (PDF) shows key events and opportunities for public participation in 2011-2012. When drawing district lines, the Legislature considered comments and suggestions gathered from the public during what was regarded as the most open, interactive, and inclusive redistricting process ever conducted.

Citizens had free and easy access to the same redistricting data and applications used by legislators and staff. Nearly 5,000 Floridians attended and more than 1,600 provided testimony at 26 public hearings in communities around the state. Thousands more sent comments and feedback via letters, email, voicemail, and social media. At every committee meeting time was reserved for members of the public, representatives of public interest groups, or civil rights advocates to present their ideas. More than 175 publicly submitted redistricting plans were received by the legislature. Together with all the citizen comments, those plans provided a voluminous collection of specific suggestions and redistricting scenarios for the Legislature to consider. 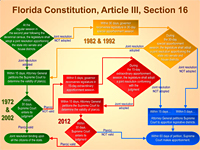 The Reapportionment Process (PDF) flowchart shows the process for approving new state house and senate districts (See Article III, Section 16 of the Florida Constitution). It also indicates the paths followed dating back to 1972.

The process is different for congressional districts, which are set by act of the Legislature and approved by the Governor (there is no mandatory review by the Florida Supreme Court).